Another Search for Vicki

That brief exchange, made in 1964 as part of the Warren Commission’s investigation, ultimately ended my search for Victoria Adams – but not until 2002, the year of my entry into the wonders of modern technology.

Since she was not specific in stating what school she attended, it forced me to begin an online look through the alumni pages of every listed high school in the San Francisco Bay area. Saying there were quite a few would be quite an understatement. Beginning with the letter “A,” it didn’t take long (actually, it did but that’s a sore spot these days) before I arrived at “P” and Presentation High School. I found on the pages of the many former students the name “Victoria Adams,” with a graduating year of “1959.” Both fit. But subsequent inquires produced no replies from the school.

A friend – a state police investigator we’ll call Larry Roberge – took over and somehow quickly ferreted out this lady’s email address. He wrote her to say he was a former Presentation classmate and wanted to know if she was the Victoria Adams who had at one time worked for the Scott Foresman Co. in Dallas. This naturally intrigued the normally cautious Miss Adams, for Presentation was an all-girls school. Nevertheless, she wrote back to Larry that yes, she was that woman. He then turned the matter over to me, and the rest became my history.

Former students and the alumni association of Presentation High School had by now been conducting somewhat of a search of their own. For quite a few years they had wondered whatever had become of Vicki and why they could not get in contact with her when their annual class reunions were held. Ironically, when “The Girl on the Stairs” appeared and the story of my journey to find Vicki was read by a former classmate of hers, another search came to an end.

This April, Presentation will be holding its 55th reunion. Once again, Vicki will not be in attendance. This time, however, her absence is for a different reason. But her presence will still be recognized, perhaps as much now as when she once walked the school’s halls in saddle shoes, a formalized dress, and wavy hair. This year there will be a special commemoration for this once very popular and now very noteworthy schoolgirl whose past remained such a mystery for all those many years. Those who knew her will be supplying related pictures and anecdotes and memories for others to see and hear and remember. “A fun-loving Vicki” is how one former classmate already described her to me, suggesting that this mirthful girl was keeping secret the consuming inner turmoil she harbored after her parents abandoned her at the age of 11. The comment seems as well to befit a high school yearbook that labeled Vicki as “jovial” and “blue-eyed,” one who wrote for her school’s newspaper, found studying to be “relaxing,” and maintained the youthful hopes of one day becoming a “teacher or social worker.”

Captured here are two images of a somewhat pensive and innocent girl who lived with a constant fear of instability, and sought refuge in the Catholic teachings as she was shuffled from one foster home to another. She believed in God and her government back then.

That would change soon enough.

My thanks to Joanne Macarthy Smith, Class of 1959, for providing a new chapter to the life of Victoria Adams. 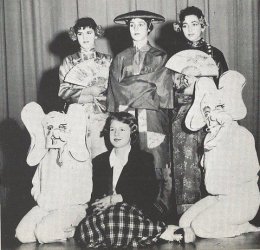